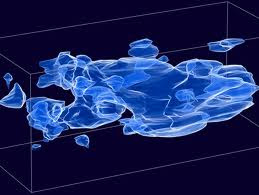 Perhaps neutrinos have something to do with dark matter (if they have a little rest mass). Or perhaps some still undiscovered elementary particles, including some very heavy (but unobserved) ones, are involved.

An idea has been floated that dark matter could be comprised of baryonic matter (protons, neutrons) if it is all tied up in 'brown dwarf stars', or in dense chunks of heavy elements. The technical term for this possibility is 'massive compact halo objects', or MACHOs.

A more likely explanation is that, rather than the normal baryons, their supersymmetric partners ('sbaryons') (cf. Part 14) are involved. This makes sense because it explains why such dark matter does not interact with ordinary mater, except through gravity.

But another possibility is that dark matter is not baryonic at all, and is rather made up of particles like 'axions' or WIMPs ('weakly interacting massive particles'). In the supersymmetry modification of the standard model, there is something called 'R symmetry', which means that the number of superparticles must be conserved in every process. It follows from this that there must exist a lightest supersymmetric particle (LSP), which is stable because there is no lighter superparticle into which it can decay under the R-symmetry constraint. Typically, the LSP is a 'linear combination' of superpartners of: the Higgs boson (Higgsino), the photon (photino), and the B gauge boson (bino).The term 'neutralino' has been coined for such an LSP; it is an example of a cosmological WIMP.

A remarkable thing about modern cosmology is that, when one calculates the number of neutralinos that survived annihilation in the early universe, the agreement with the known amount of dark matter turns out to be extremely good; in fact, too good to be true!

There is not only dark matter, but also dark energy. Till the early 1990s the generally accepted belief in cosmology was that the universe cannot go on expanding at the current rate; the gravitational pull of all matter must at least slow down the rate of expansion. Then something unexpected happened. In 1998 the Hubble Space Telescope observations showed that the expansion of the universe is actually accelerating, rather than slowing down. Three explanations were offered for this:

1. Perhaps the acceleration can be explained in terms of a long-discarded version of Einstein's theory of gravitation, the one that contained a COSMOLOGICAL CONSTANT. In Einstein's theory, it is possible for more space to come into existence. In one version of his theory there was a cosmological constant, 'put by hand' (and later withdrawn). This version makes a prediction that 'empty space' can possess energy of its own. Since this energy is a property of space itself, the energy density would not be diluted as the universe expands. As space expands, more energy comes into existence, and the universe expands faster and faster.

2. Perhaps there is some unknown energy-fluid that fills all space.

3. Perhaps Einstein's theory is wrong, and a new theory is needed that would include a new field that can explain the acceleration.

No matter what the true explanation is, the phrase 'dark energy' was introduced to account for the mystery. It turns out that a whopping ~74% of the universe is dark energy. Dark matter makes up ~22%. The rest (including normal matter) adds up to less than 4% of the universe.

Why should that be so? As stated above, one explanation can come from Einstein's general-relativity theory, with cosmological constant included. 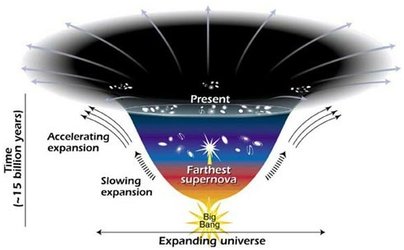 Another explanation for how space possesses energy comes from quantum field theory. In quantum physics when we speak of vacuum, we really mean a space which has a certain minimum-energy state (cf. Part 14).

We may not understand dark matter much, but it is just as well that we have already discovered it. The curvature of spacetime in the universe depends on the overall mass/energy density of the universe. Since the curvature, i.e. the geometry, is observed to be flat or Euclidean, rather than curved (either spherical or hyperboloid), the mass/energy density must have a certain critical value. This is indeed found to be the case, provided we include the contribution from the known amount of dark matter. 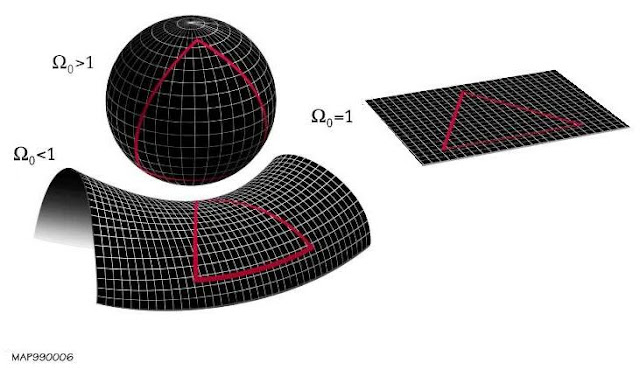 Why has the geometry of our universe been flat, almost right after the Big Bang? An answer to this 'flatness problem' comes from the inflation postulate I described in Part 8. The exponentially rapid expansion ('inflation') of our universe from a size much smaller than that of a proton to the size of a tennis ball (or more) smoothed out our spacetime to make it very flat. And dark matter has contributed to this flat geometry.