Title
Latent, Manifest, and Broken Symmetry: A Bottom-up Approach to Symmetry, with Implications for Complex Networks 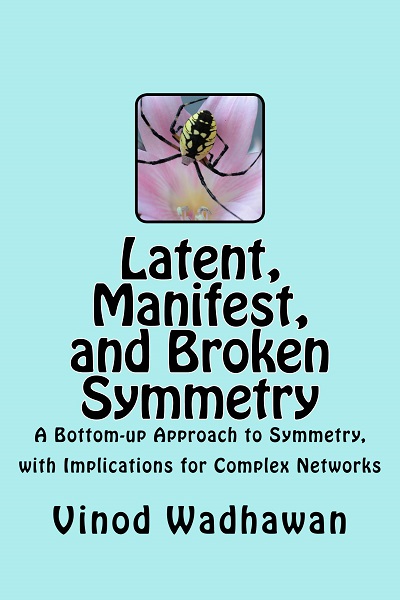 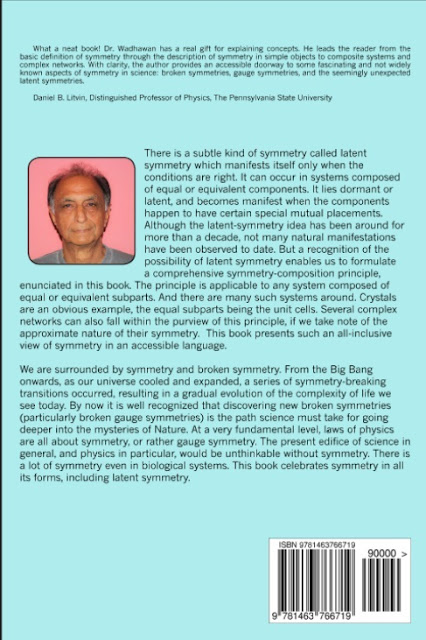 There is a subtle kind of symmetry called latent symmetry which manifests itself only when the conditions are right. It can occur in systems composed of equal or equivalent components. It lies dormant or latent, and becomes manifest when the components happen to have certain special mutual placements. Although the latent-symmetry idea has been around for more than a decade, not many natural manifestations have been observed to date. But a recognition of the possibility of latent symmetry enables us to formulate a comprehensive symmetry-composition principle enunciated in this book. The principle is applicable to any system composed of equal or equivalent sub-parts. And there are many such systems around. Crystals are an obvious example, the equal components being the unit cells. Several complex networks can also fall within the purview of this principle, if we take note of the approximate nature of their symmetry. This book presents such an all-inclusive view of symmetry in an accessible language.

We are surrounded by symmetry and broken symmetry. From the Big Bang onwards, as our universe cooled and expanded, a series of symmetry-breaking transitions occurred, resulting in a gradual evolution of the complexity of life we see today. By now it is well recognized that discovering new broken symmetries (particularly broken gauge symmetries) is the path science must take for going deeper into the mysteries of Nature. At a very fundamental level, laws of physics are all about symmetry. The present edifice of science in general, and physics in particular, would be unthinkable without symmetry. There is a lot of symmetry even in biological systems. This book celebrates symmetry in all its forms, including latent symmetry.

Foreword to first edition by Prof. A. M. Glazer

Wherever we look we see a variety of patterns and shapes that show different types of symmetry. Much of this is obvious, such as for instance when we look at the pyramids of Egypt, or crystals in a museum. However, what is not so obvious is just what exactly is symmetry and why is it so prevalent? In this unique and intriguing book, Professor Vinod Wadhawan has set about answering these sorts of questions. He takes us on a journey from very basic descriptions, such as the growth of a crystal, on to more esoteric and complex notions, demonstrating that, in fact, symmetry is even more pervasive than we thought before. Some symmetries are far from obvious, as illustrated by the idea of latent symmetry. This is said to manifest itself when one combines two or more ‘equal’ objects or systems, each with its own symmetry description, and the resulting composite system exhibits new symmetry elements that were not expected from the original systems. For instance, two identical right-angled isosceles triangles can be joined together to form a square, that has an unanticipated four-fold rotational symmetry. The notion of latent symmetry is relatively new and deserves further consideration.

Not only do we have the symmetry exhibited by living organisms and physical objects, but also by ideas themselves. As such this book has a strong philosophical content that will enable the reader to gain much more insight into the phenomenon than is normally got from a typical university education. Wadhawan shows us how even the concept of randomness is intricately bound up with notions of symmetry. Even the idea of predictability is an example of symmetry in action! And then, having explained what symmetry is, emphasis is placed on what happens when symmetry is broken. In a sense, pure symmetry could even be described as rather boring, since it implies a lack of change or progress. Nonetheless, we still need to understand it. It is when symmetry is broken that fun things start to happen and new ideas, progress and phenomena are created. This book explains how this comes about and why symmetry-breaking is so important. The book is written with an eye to explaining the fundamental
concepts of symmetry, rather than go into complex mathematical proofs and lemmas, which in any case can be found elsewhere for those who like those sorts of things. This means that Wadhawan is able instead to concentrate on the philosophical importance of understanding symmetry, and how it impacts on the world that we observe. Rather like the Second Law of Thermodynamics, symmetry is seen to play a vital role in what holds the universe together. You can see then that this book covers just about everything that we know about symmetry, and possibly that which we do not!

Preface to the First Edition

The symmetry of any composite system made up of equal or equivalent components depends on at least two factors: The inherent symmetry of each component, and the symmetry imposed on the system by the manner in which the components are arranged with respect to one another (‘placement symmetry’). But if the composite system is found to have a higher symmetry than what can be accounted for by these two factors, then that extra, unexpected symmetry is what I call latent symmetry. It is as if this additional symmetry was lying latent or dormant in the equal or equivalent components, and became manifest only when the components came together to form the composite system. To accommodate such a possibility, I enunciate in this book a new symmetry composition principle. According to it: When the occurrence of a symmetry implies the coexistence of two or more equal or equivalent building blocks, the overall symmetry is either the product of the building-block-symmetry group and the placement-symmetry group, or there is an additional component which arises from the latent symmetry present in the building blocks.

The emergence of symmetry in thermodynamically open composite systems can be traced ultimately to the second law of thermodynamics, which is therefore the primary organizing principle. How this principle operates in various diverse systems is discussed in this book. It is argued that the same explanation holds, whether it is the symmetry of a crystal, or that of a complex social network.

Symmetry of complex networks is, in fact, another major theme of this book. That real-life networks should possess any symmetry at all may come as a surprise. But by now we should all be reconciled to the fact that there is something about symmetry which touches everything in our universe. The present edifice of science in general, and physics in particular, would be unthinkable without symmetry. There is a lot of symmetry even in biological systems.

We are surrounded not only by symmetry, but also broken symmetry. In fact, we see more of broken symmetry than intact symmetry. From the Big Bang onwards, as our universe cooled and expanded, a series of symmetry-breaking transitions occurred, leading eventually to the complexity of life we see today. This book is an attempt to explain, in an accessible language, the interplay between latent, manifest, and broken symmetry.

Preface to the Second Edition

The book has been revised and updated substantially. In particular, gauge symmetry, which was discussed only briefly in the first edition, has been given the prominence it deserves. A new chapter has been added to deal with it in some detail.

2.2 Analogy and classification are symmetry 11

2.7 Thermodynamics and the symmetry principle 16

3.2 Coset decomposition of a group 23

4.3 Permutation symmetry in graphs and networks 43

5.1 Growth of a crystal as an ordering process 47

5.3 Symmetry as a secondary organizing principle 50

6. The Different Types of Exact and Approximate Symmetry 59

7.4 The Hermann theorem of crystal physics, and its applications 77

9.3 The Landau theory of phase transitions 95

10. Particle Physics, Cosmology, and the Search for New Symmetries111

10.1 The Standard Model of Particle Physics 111

11.2 The distinction between potential symmetry and latent symmetry

11.3 The fundamental theorem of symmetry 133

12.4  An example of how ignorance about latent symmetry can
lead to errors 145

13.3 Origins of symmetry in complex networks 156

13.4 The similar-linkage-pattern model for symmetry 157

13.5 The free-energy landscape for biological networks 158

13.6 Social networks and the meaning of cohesive energy 160

About the Author 189
Posted by Vinod Wadhawan at 22:11 No comments: Links to this post