Our universe has been expanding. This means that if we extrapolate backwards in time, there must have been an instant when there was (almost) a point universe. That was the Big Bang moment, followed by continual expansion. But for explaining our observations of the cosmos, something additional had to be postulated, namely a very brief period of exponentially rapid expansion ('inflation') very soon after the Big Bang. After this inflation interlude our universe settled to a far slower expansion rate.

Alan Guth was the originator of the inflation postulate, which solves, among other things, the Horizon Problem (cf. Part 8) and the Flatness Problem (Part 15). 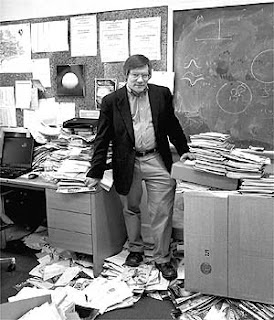 For postulating inflation, Guth was inspired by the analogy of a 'first-order'phase transition. As an example, consider the freezing phenomenon in water. As water is cooled, its free energy changes. There comes a temperature (the freezing point, 0oC) below which a different phase, namely ice, has a lower free energy than liquid water. Therefore, as demanded by the second law of thermodynamics, a phase transition should occur from liquid water to ice. Yes, but that is not the full story.

Suppose you take extremely pure water, and also ensure that there are no disturbances like vibrations etc. Then you find that you can 'supercool' it; i.e., it continues to be a liquid even below 0oC. This happens because each phase of H2O is stable in a certain range of temperatures, and, since it is a first-order phase transition, there is no reason that 0oC be the temperature where one stability range ends and the other begins. There is a small range of temperatures around 0oC in which both phases are stable, meaning that liquid water and ice can coexist. But below 0oC ice does have a lower free energy than liquid water. Therefore even the slightest disturbance to supercooled water can make it undergo rapidly the arrested phase transition to ice. When this happens, the trapped excess free energy gets released. We call it 'latent heat'.

Something similar happened to the nascent universe. As it was cooling after the Big Bang, it got trapped in a supercooled or metastable state. On further cooling, a sudden, explosive, phase transition occurred. Here the equivalent of the 'latent heat' released was the positive vacuum energy (of the 'false vacuum' of the metastable state). The volume of the tiny universe increased by a factor of at least 1078 during the inflation, which occurred during the early part of the electroweak epoch: It started ~10-36 seconds after time-zero, and ended ~5 x 10-33 seconds later. 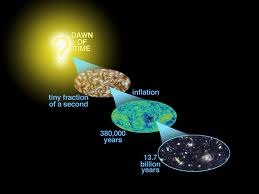 Let us put in some numbers. Even for the entire inflation period, ∆t ~ 10-33 sec only. The uncertainty principle says that ∆E∆t ≥ h/(4π). Since h/(4π) ~ 10-27 erg sec, we get ∆E ~106 erg, or ~109 GeV. Just about any value of ∆E larger than this is also possible as a quantum fluctuation (resulting in the appearance and disappearance of 'virtual particles') if ∆t is appropriately smaller than 10-33 sec. Normally this would be of no serious significance if the virtual particles could disappear within the time ∆t. But space was doubling in length every 10-37 seconds during inflation, so THE MOMENTARY INHOMOGENEITIES CREATED BY QUANTUM FLUCTUATIONS GOT YANKED APART RAPIDLY, AND WERE FROZEN IN SPACE WHEN INFLATION ENDED; there was no going back.

The 'false vacuum' energy was of essentially the same nature as that coming from Einstein's cosmological constant, or dark energy.

Predictions of this cosmic-inflation model are in conformity with the characteristic density inhomogeneities recorded in 2006 in the CMB map (for a flat-geometry universe at the end of the inflation epoch).

The expansion of space during the inflation interlude was much faster than the speed of light. This is possible. According to the special theory of relativity (cf. Part 10), nothing can travel through space at a speed faster than that of light. But there is no limit on the speed with which space itself can expand.

(ii) 380,000 years after the Big Bang the evolution of the structure frozen at the end of the inflation episode led to what we see in the CMB map today. In due course, this structure evolved into the present configuration of galaxies, clusters of galaxies, life, people.

You can appreciate why the inflation postulate is such an integral part of modern cosmology. There is more to it, still. INFLATION ALSO EXPLAINS WHY THERE SHOULD BE A MULTIVERSE (i.e. many universes)

To understand that, let us hark back to the phase transitions in water, but this time let us consider boiling instead of freezing. Above 100oC, vapour or steam is a more stable phase of H2O than the liquid phase. And it is again a first-order phase transition, meaning that there is a range of temperatures in which liquid water and steam can coexist. Because of thermal fluctuations and other local variations, bubbles of steam start appearing even below 100oC, and they do so with increasing frequency as the temperature is increased, till the whole system starts boiling. 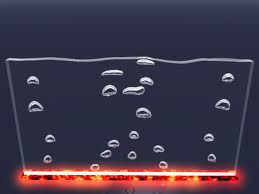 Something similar happened during cosmic inflation, and this phenomenon is called 'chaotic inflation'. There was a time interval during which inflation occurred, and at any instant during this interval a different universe could inflate and go its separate way, like a bubble of steam in the above picture. 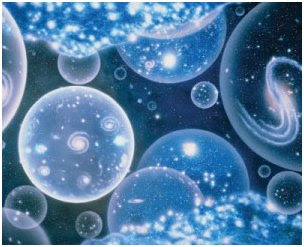 So, not just our universe, but a whole lot of universes, emerged before the end of the inflation era, each with its own value for the cosmological constant and other fundamental constants and laws of physics. There is a multiverse, rather than just one (i.e., our) universe.
Posted by Vinod Wadhawan at 06:55