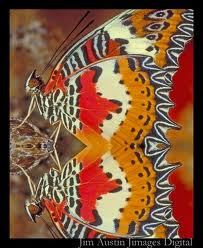 The ability to reduce everything to simple fundamental laws does not imply the ability to start from those laws and reconstruct the universe. The constructionist hypothesis breaks down when confronted with the twin difficulties of scale and complexity. At each level of complexity entirely new properties appear. Psychology is not applied biology, nor is biology applied chemistry. We can now see that the whole becomes not merely more, but very different from the sum of its parts (Anderson 1972).

In complexity science (and in philosophy), 'emergence' is a technical term. It signifies a breakdown of the reductionistic approach usually adopted in conventional science.

To give you a feel for what emergence means, I shall explain why even the second law of thermodynamics is actually an emergent law. The second law is something which every macroscopic system must obey, in spite of the fact that the dynamics of the individual microscopic constituents of the system does not require that the law be obeyed. Because of this law, in the macroscopic world in which we live, we take the direction of increasing time as that in which the entropy of an isolated system increases and irreversible processes occur. All macroscopic phenomena have the property of time-asymmetry.

Similarly, causality may be largely an emergent property, but I must think about it some more.

The existence of emergent laws has bothered several philosophers and scientists from times immemorial. In fact it continues to do so. Many of them are still not able to reconcile themselves to the very idea of emergence. Even Boltzmann, the originator of statistical thermodynamics, did try for a while to reconcile the time-symmetry of Newton’s equations of motion with the time-asymmetry inherent in the second law. Starting from Newton’s equations of motion, Boltzmann did succeed in achieving time-asymmetry in the nonlinear 'transport equation' derived by him. The solution of this equation was the famous 'Boltzmann H function'. However, he soon realized that although he had succeeded in deriving the occurrence of time-asymmetric behaviour in a macroscopic system, he had introduced probability considerations for doing this, and this had serious connotations regarding the nature of uncertainty.

He then went to the other extreme, and approached the whole problem from the statistical angle alone. But the equation derived by him for what we now call Boltzmann probability has a dynamical flavour. It is the probability that a dynamical system will be in one of a given set of states, and is equal to the fraction of the total observation time that the system spends in that set of states.

Boltzmann’s work met with stiff resistance and ridicule because his contemporaries just could not accept emergence. The second law is a statistical law (cf. Part 22), and people made a distinction between EXACT LAW which is never violated and STATISTICAL LAW which is practically never violated for a system of large number of constituents. Boltzmann was very depressed by the response to his profound work, and this possibly contributed to his suicide.

It has been suggested by some scientists that the time-asymmetric nature of the second law is partly a consequence of our inability to keep individual track of each of the very large number of molecules (typically ~1023) in a macroscopic system, implying that the origin of its time-asymmetric nature is statistical. But a better rationalization can be achieved by probability-based arguments:

Let us refer to the 'free expansion' figure I drew for Part 22, and which I show here again:

Now look at the final configuration in which the gas has, on its own, occupied twice the volume. The motion of each molecule is governed by time-symmetric laws of dynamics. If we could somehow reverse the velocities of all the molecules at one particular moment of time, they can go back to occupying the left half of the chamber shown in the left part. But for this to happen the initial conditions, or the boundary conditions, for all the ~1023 molecules will have to be one particular set from among the infinite such sets of initial conditions, and the probability for that to be the case is very very close to zero. That is why irreversibility and time-asymmetry arise at the macroscopic level.

The second law is an example of what is called WEAK EMERGENCE. Although different parts of a macroscopic system are interconnected, they are not necessarily interdependent. If we select a smaller part of such a macroscopic system, the second law still holds for it. Similarly, the pressure and temperature of a gas are emergent properties, but only weakly emergent properties.

STRONG EMERGENCE, by contrast, is something for a system as a whole. There is an interdependence among the various subparts, and each part is indispensable for the overall emergent behaviour. 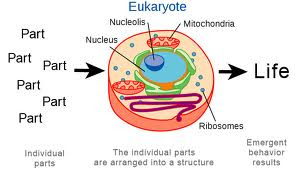 Strong emergence is global. Weak emergence may be local.

Is space-time an emergent property of the universe? Click HERE.