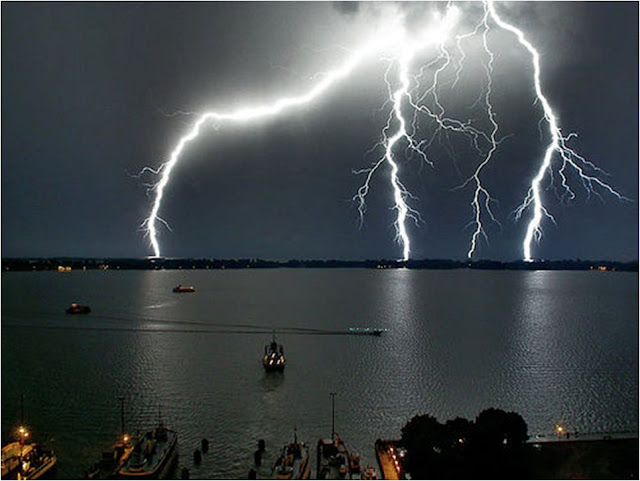 The idea that Nature is full of 'fractal' configurations was first put forward and investigated by Benoit Mandelbrot in 1977. A fractal structure has scale invariance and self-similarity: It looks the same ('self-similar') at just about any level of magnification or change of scale. This is a consequence of the fact the same 'local rule' is in operation everywhere for the time or space evolution of the system. 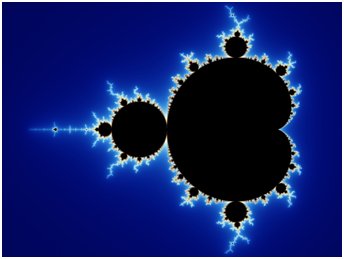 The famous Koch's snowflake illustrates the point. The recipe (local rule) for creating it is very simple. A fractal object has an 'initiator' and a 'generator'. In the figure below the initiator is an equilateral triangle, shown in the top left corner. 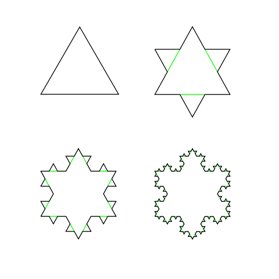 For obtaining the generator, we partition each side of the triangle into three equal parts, remove the middle one-third, and replace the gap so created by two segments of the same length as the other segments in the form of a peak (i.e., we add an equilateral triangle at each gap). The resulting form is shown on the top right corner in the figure above.

This process can be repeated indefinitely, applying the generator procedure to each straight segment. The next two iterations are shown in the lower half of the figure.

Koch's snowflake looks complex, but has an underlying simplicity, once we have identified the generating mechanism. The self-similarity exhibited by chaotic dynamics (cf. Part 35), as also by other fractal patterns, points to the sameness of the underlying causes at all length scales. No wonder, an enormous number of natural entities have fractal shapes. The picture below (of a Romanesco broccoli) is an example. Each time new triangles are added to the Koch snowflake figure, the length of the line increases. And yet the inner area of the curve remains less than the area of a circle drawn around the original triangle. It is a line of infinite length surrounding a finite area.

The word 'fractal' and the notion of 'fractal dimensions' were introduced to reflect this fact. The fractal dimension of the Koch snowflake is calculated to be ~1.26. The curve is coarser than a 1-dimensional smooth curve. Since it is more crinkly, it is better at taking up space. However, it is not as good at filling up space as a square (a 2-dimensional object). So it makes sense that the dimension of the Koch curve is a fraction, somewhere between 1 and 2.

Atmospheric phenomena have chaotic character (cf. Part 35). Their complexity is well-illustrated by our inability to make long-term predictions about weather with a high degree of reliability. As stated in Part 35, the chaotic nature of these phenomena was first discovered by Lorenz  when he was investigating a coupled system of ordinary differential equations, using a simplified model of 2-dimensional thermal convection, namely the so-called 'Rayleigh-Bénard convection'.

The equations Lorenz formulated for weather phenomena are now called the Lorenz equations. There are three control parameters in the equations, usually denoted by σ, r, and b.

Suppose we take σ = 10.00 and b = 2.67, and let r be the variable control parameter. It is found that there is a critical value of r, namely rc = 24.74, at which there is a sudden change of behaviour. Below this value the system decays to a steady non-oscillating state, i.e. there is a stable 'fixed point' or attractor in phase space. For r > rc, continuous oscillatory behaviour is observed.

The Lorenz strange attractor has an extremely complex structure. A further increase in the value of r causes a series of reverse bifurcations in phase space; i.e., the system moves back from chaotic orbits to periodic orbits.

Computer-generated fractal art is a truly beautiful offshoot of the science of fractals. 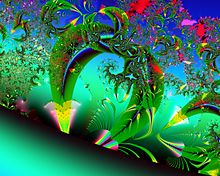 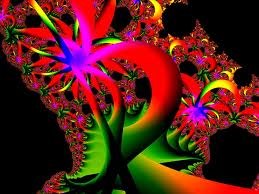