Complex adaptive systems (CASs) are complex systems that not only evolve like any other dynamical system, but also learn by making use of the information they have acquired.

Learning by a CAS requires, among other things, the evolution of an ability to distinguish between the random and the regular. CASs can undergo processes like biological evolution (or biological-like evolution). They do not just operate in an environment created for them initially, but have the capability to change the environment. For example, species, ant colonies, corporations, and industries evolve to improve their chances of survival in a changing environment. Similarly, the marketplace adapts to factors like immigration, technological developments, prices, extent of availability of raw materials, and changes in tastes and lifestyles. Some more examples of CASs are: A baby learning to walk; a strain of bacteria evolving resistance to an antibiotic; a beehive or ant colony adjusting to the decimation of a part of it; etc.

I list here the characteristic features of CASs, also called vivisystems. I have in mind systems that are large in terms of numbers of individuals or agents comprising the group. 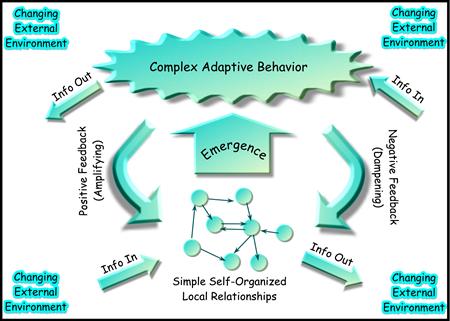 As pointed out by Murray Gell-Mann in his great book The Quark and the Jaguar, the crux of a highly complex system is in its non-random aspects. He introduced the notion of EFFECTIVE COMPLEXITY, and defined it (relative to a CAS that is observing it) as roughly the length of a concise description of the regularities of that system or bit string. By contrast, algorithmic information content (AIC) (cf. Part 23) refers to the length of the concise description of the whole system or string, rather than referring to the regularities alone.

A CAS separates regularities from randomness. Therefore a CAS provides us the possibility of defining complexity in terms of the length of the schema used by it for describing and predicting an incoming data stream: 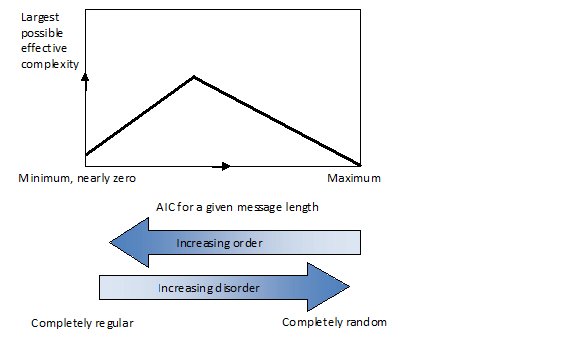 For intermediate situations, the effective complexity is substantial.

Thus, for effective complexity to be significant, the AIC must not be too high or too low. That is, the system should be neither too orderly nor too disorderly. For such situations, the AIC is substantial but not maximal, and it has two contributions: The apparently regular portion (corresponding to the effective complexity), and the apparently random or stochastic portion. Complexity thrives when there is a critical balance between order and chaos.
Posted by Vinod Wadhawan at 09:43