How something approaching intelligence can arise in a complex system comprising of non-intelligent individuals? I shall answer this question here by explaining how honeybees in a beehive operate as a single, intelligent, superorganism. I shall also point out how we humans can draw some practical lessons from studies on such complex systems. 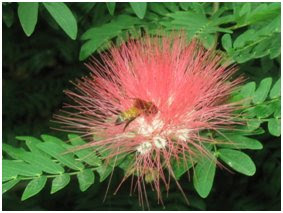 The honeybee is the most thoroughly investigated social insect of all. The beehive is an example of a self-organized superorganism. Each honeybee has hardly any intelligence to speak of, but the hive as a whole possesses ‘swarm intelligence’.

The queen bee emits a pheromone, namely trans-9-keto-2-decenoic acid. [Pheromones are chemicals that play the role of signals among members of the same species.] This ‘queen substance’ is secreted by the mandibular glands of the queen bee. Worker bees lick the queen’s body. They move around and regurgitate the chemical, so that it spreads in the hive. The pheromone has several effects on the bees:

(i) The ovaries of the worker bees do not develop.

(ii) They raise larvae in such a way that the young bees cannot become queens, so that the queen has no rivals so long as she is secreting the pheromone. [It may be mentioned here that all female honeybees, including the queen bees, develop from larvae which are identical genetically. Those fed on a certain ‘royal jelly’ become fertile queens, while the rest remain sterile workers.]

(iii) The pheromone guides a husband to the queen on her nuptial flight.

(iv) The pheromone promotes the consummation of the marriage.

When the secretion of the pheromone by the queen bee stops, the above processes are annulled. The worker bees become fertile again, and daughter queens can be raised.

Each hive has a distinctive scent, common to all its members. This enables the bees to recognize members of the same hive, and repel foreigner bees.

HOW DOES A LARGE GROUP LIKE THIS TAKE DECISIONS? Evolutionary processes have made the beehive an effective decision-making unit, even when nobody is in command. The queen bee is not in command. Let us see how, for example, the beehive collectively decides on a new site for setting up another hive.

In late summer or early spring, when the sources of honey are aplenty, a large colony of bees (typically with ~10,000 bees) splits into two. A daughter queen and about half the population stays back in the old hive, and the rest, including the queen bee, leave so that they can start a new hive at a carefully selected site. How is the new site chosen?

Typically, a few hundred worker bees go scouting for possible sites. The rest stay bivouacked on a nearby tree branch, conserving energy, till an acceptable new site has been selected. An acceptable site for nesting is typically a cavity in a tree with a volume greater than 20 litres, and an entrance hole smaller than 30 cm2. The hole should be several meters above the ground, facing south, and located at the bottom of the cavity.

The scout bees come back and report to the swarm about possible nesting sites by dancing a waggle dance in particular ways. Typically there are about a dozen sites competing for attention. During the report, the more vigorously a scout dances, the better must be the site being championed.

Deputy bees then go to check out the competing sites according to the intensity of the dances. They concur with the scouts whose sites are good by joining the dances of those scouts. That induces more followers to check out the lead prospects. They return and join the show by leaping into the performance of their choice.

By compounding emphasis (positive feedback), the favourite site gets more visitors, thus increasing further the number of visitors. Finally, the swarm flies in the direction indicated by mob vote. As Kevin Kelly said (1994), ‘It’s an election hall of idiots, for idiots, and by idiots, and it works marvellously’.
Evolutionary processes have been operative, not only in the development of the waggle dance as one of the signalling mechanisms in the beehive (other signalling mechanisms being via the specific pheromone mentioned above), but also for some other survival instincts of the bees. Seeley and coworkers (American Scientist, 94(3): 220 (2006)) discovered a good example of this in the speed-versus-accuracy feature of the final decision for the new nesting site. Typically, there are about a dozen nesting sites competing for attention. Do all but one get eliminated by compounding emphasis and consensus? No, not necessarily.

Eliminating all but one site will adversely affect the speed of the decision-making process, which may be detrimental to the overall welfare of the hive (e.g. higher energy costs). Rather than going by consensus (agreement among practically all the scout bees), the hive goes by quorum (sufficient number of scout bees visiting any site). The swarm flies to occupy a site which is seen to be visited by ~150 bees. This may turn out to be an erroneous decision, but not very likely to be so. A compromise is reached between accuracy in the selection of the nesting site, and speed with which the final decision is taken. Through a process of Darwinian natural selection and evolution, the species has fine-tuned itself for what is best for its survival and propagation. Emergent behaviour and biological evolution go hand in hand.

Let us now list the salient features of what goes on in this complex adaptive system.

1.  The system comprises of a large number of distributed members or agents, namely the honeybees, acting in parallel.

2.  In the language of network theory, each bee can be viewed as a node of the network, and a possible line (‘edge’) joining any two nodes represents the interaction (communication) between those two bees.

3.  Interactions between nodes or agents are through signals (waggle dance, pheromone secretion and ingestion, etc.).

4.  An edge in the network represents exchange of information.

5.  The nodes (bees) have sensors for receiving the information (visual, chemical, tactile).

6.  Processing of information occurs in the brains of the bees, aided by ‘instinct’ or in-born tendencies (internal rules). That the bees survive and flourish is proof that evolutionary processes have led to the development of adequately appropriate internal rules.

7.  The beehive is an ADAPTIVE organism (a complex adaptive system). For example, if a fraction of the population is decimated, the remainder would quickly readjust, and carry on as before.

8.  There is no central command.

9.  The individuals are autonomous, but what they do is influenced strongly by what they ‘see’ others doing.

10.  Emergent behaviour arises through sheer large numbers and effective communication and interaction. In the present case, swarm intelligence emerges, of which no single member is capable alone.

12. The reason for the nonlinearity can be sought and found in the positive feedback feature, or in the law of increasing returns.

13. The evolutionary (internal rules) part of the behaviour of the bees can also be explained in terms of emergent behaviour. The networked swarm is adaptable and resilient, and it nurtures small failures so that large failures do not happen frequently. This helps not only survival and propagation, but also favours NOVELTY. The large number of combinations and permutations possible among the interacting agents has the potential for new possibilities. And if heritability is brought in, individual behaviour and experimentation leads to PERPETUAL NOVELTY, the hallmark of evolution.

14. The beehive can teach us a thing or two about decision making by groups of individuals, particularly the compromise between good decisions and swift decisions. Swift decisions may be necessary at times, even at the risk of some mistakes. Seeley et al. (2006) have pointed out some instructive features of how the bees do it.

·      The first thing to note is that the foraging bees are self-organized in a way that promotes diversity of information. There is no ‘leader’ to snuff out dissent. The decision-making process is spread over all the members of the group in a decentralized fashion. Diverse information about all kinds of nesting sites is brought to the hive, without bias.

·      Secondly, the bees are autonomous, with no inclination or pressure for blindly imitating other bees. There is fair competition among the possible nesting sites. On seeing a waggle dance, a bee goes to the suggested site to check for itself the merits of that site. This independence of action helps prevent propagation of errors in site selection.

·      Thirdly, the quorum-sensing approach allows aggregation of the diversity and independence of information, but only long enough to ensure a low probability of decision error.

Investigation of one type of complex system can provide insights into what may be happening in other complex systems. An obvious case in point is: How to understand human intelligence as a kind of swarm intelligence. Human intelligence emerges from the interactions among neurons, in spite of the fact that any particular neuron is as dumb as can be.

Does that whet your appetite for more? Read my full online article. Or my book Complexity Science.
Posted by Vinod Wadhawan at 10:20