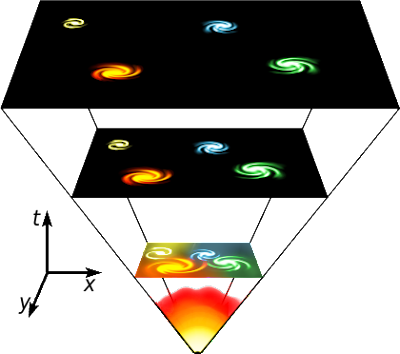 How and when did our universe begin?

According to the most acceptable scientific model at present, our universe was born ~13.7 billion years ago. A so-called 'Big Bang' occurred at the moment of the birth of the universe, and this moment was also the Time Zero for our universe.

But how can something emerge out of nothing? Is that not a violation of the law of conservation of mass and energy? Was there not a Creator involved? No.

A proper explanation requires reference to what is called quantum field theory. But I shall attempt a simple explanation here, just to convey the point that there was no net creation or annihilation of mass/energy involved.

We all know about the force of gravity that the Earth exerts on all objects. If your mass is m, then your weight is mg, where g is 'acceleration due to gravity'. The mass is a measure of the quantity of matter. The weight is a force; the force the Earth exerts to pull you towards its centre. [Newton's second law of motion says that force is equal to mass multiplied by acceleration: F = m x a; and a is the same as g in our example.]

Your weight on the Moon would be one-sixth what it is on Earth because the Moon has a lower mass than the Earth, with a correspondingly lower value for its g.

Consider an object (say of mass m1) that is so far from everything that there is no gravitational force on it. This is really not possible, but just imagine it as an idealization. We say that it is a 'free' object, free from any gravitational force acting on it.

Next, consider another object, of mass m2, at a certain finite distance from the first object. The two attract each other. Physicists speak of this as a negative-energy configuration, because (positive) energy needs to be spent to take the two objects so far away from each other that they are free of each other's force of attraction. By contrast, a positive–energy configuration would be one in which the two objects repelled each other, rather than attracting.

So, the gravitational interaction makes a negative contribution to the overall energy.

The other big idea I have to introduce here is that mass and energy are inter-convertible. This fact is embodied in the famous Einstein equation: E = mc2. Here c is the speed of light in vacuum. The equation says that if a mass m disappears, an equivalent amount of energy E would be produced or released.

This is how energy is produced in our Sun (by thermonuclear reactions). The mass of five atoms of hydrogen (or rather an atom of 'deuterium' (which is twice as heavy as an atom of hydrogen) and an atom of 'tritium' (thrice as heavy as an atom of hydrogen)) is a little more than that of an atom of helium and a charge-neutral particle called the 'neutron'. In the interior of the Sun, conditions are right for the fusing of deuterium and tritium atoms, and the creation of an atom of helium plus a free neutron; the balance mass appears as energy. We receive some of this life-sustaining solar energy on Earth.
Similarly, in a fission-based nuclear reactor we produce energy by losing a little mass of, say, uranium. The nucleus of an atom of uranium captures a neutron to form a 'compound nucleus'. This then splits (fissions) to two different nuclei the sum total of the masses of which is a little less than the mass of the compound nucleus. The balance mass appears as kinetic energy (same as heat energy) of the particles involved.

What happened at the Big Bang was that there was a simultaneous emergence of the gravitational interaction. There was an explosion of sorts, in which radiation (and, a little latter, matter) emerged. The universe has been expanding ever since then. Expansion means an increase in the distances between the celestial bodies. Such ever-increasing distances mean a build-up of negative energy, which gets compensated by the creation of an equivalent amount of matter.

This is how mass gets created out of 'nothing', and there is no violation of the law of mass/energy conservation. This 'nothing' is actually a vacuum, which has some remarkable properties which can be described in the language of quantum mechanics only. Further, according to Einstein's theory of gravitation (to be described in a future post), the existence of a certain 'cosmological constant' can endow empty space with mass/energy.


But let us not get into those details yet. For the time being, suffice it to say that our universe emerged out of nothing, and this did not require the intervention of a Creator. The book by Hawking & Mlodinow explains that in some detail.

Of course, there are other models which compete with the Big Bang model, and the final word has not been said yet. Science is open to all ideas, subject to rational analysis and experimental verification. One such model postulates a cyclical set of events, involving an endless series of Big Bangs and Big Crunches. But then, in such a model, there is no need to argue how matter can emerge out of nothing.